The Rangers Charity Foundation has a long and proud tradition of working with services related charities and was a joint signatory, along with the Club, to the Armed Forces Covenant in 2016.

We went on to become the first club and club charity in the UK to receive the Armed Forces Covenant Employer Recognition Scheme’s Gold Award from the Ministry of Defence in 2019.

The Foundation has donated over £208,000 in cash to armed forces and veterans’ charities to date, as well as significant in-kind support.  Donations have included over £57,000 to veterans’ charity Erskine and £40,000 to ABF The Soldiers’ Charity, as well as smaller donations to many others such as Combat Stress, Poppyscotland, Bravehound, The Coming Home Centre and AA Veterans Support.

Our Armed Forces Fund selects services-related charities to work with each season and for season 2021/222, the Foundation chose to support The Royal Navy and Royal Marines Charity, RAF Benevolent Fund and ABF The Soldiers’ Charity More on The Royal Navy and Royal Marines Charity here.

The Royal Air Force Benevolent Fund is the RAF’s leading welfare charity. They exist to support current and former members of the RAF, their partners and dependants, whenever they need help. In 2020, they spent £26M supporting more than 63,700 members of the RAF Family.

ABF The Soldier's Charity are the Army’s national charity, here for soldiers, veterans and their families for life. Since 1944, they’ve been at the forefront of support for the Army family. They are one of the largest funders in the sector, supporting around 60,000 people and funding 43 other charities and organisations. Their work spans mobility, employment, housing, mental health, families and elderly care. It is ever-changing – as are the needs of those they serve. When they hear of a person or family in need of help, they aim to respond with a grant within 48 hours.  When you support ABF The Soldiers' Charity, you support the whole Army family.

The Rangers Charity Foundation was a joint signatory, along with the Club, to the Armed Forces Covenant in 2016.  As well as significant donations to armed forces and veterans’ charities to date and in-kind support such as can collections and signed merchandise, the Club and Foundation also donate tickets for veterans via the Tickets For Good scheme and the Foundation’s Glasgow Veterans United programme with Glasgow’s Helping Heroes, which ensures that veterans have the assistance they need to settle back in to civilian life. Serving personnel are also able to buy tickets for home league fixtures at a reduced price (subject to availability). 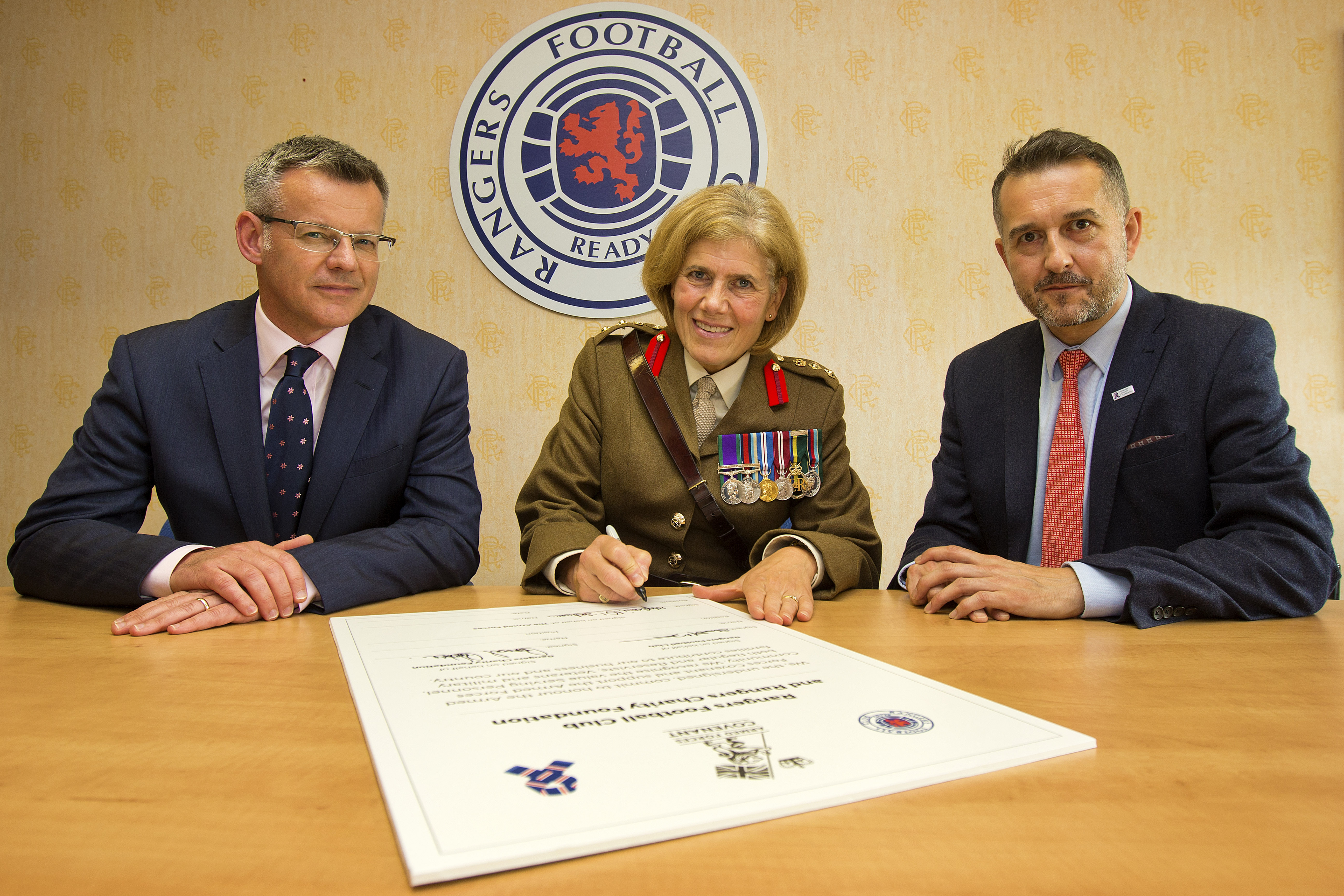 The Club and Foundation organises an annual Armed Forces Day celebration in the presence of 48,000 supporters at Ibrox Stadium, and an annual event to mark Remembrance Day.

We also advocate for the Armed Forces Covenant with our corporate clients and business partners, operate positive policies in the workplace for veterans, reservists and their families and support various military sport initiatives.

This type of support for the services earned the Club and Foundation an Armed Forces Covenant Employer Recognition Scheme’s Gold Award from the Ministry of Defence in 2019, becoming the first club and club charity in the UK to win the award. 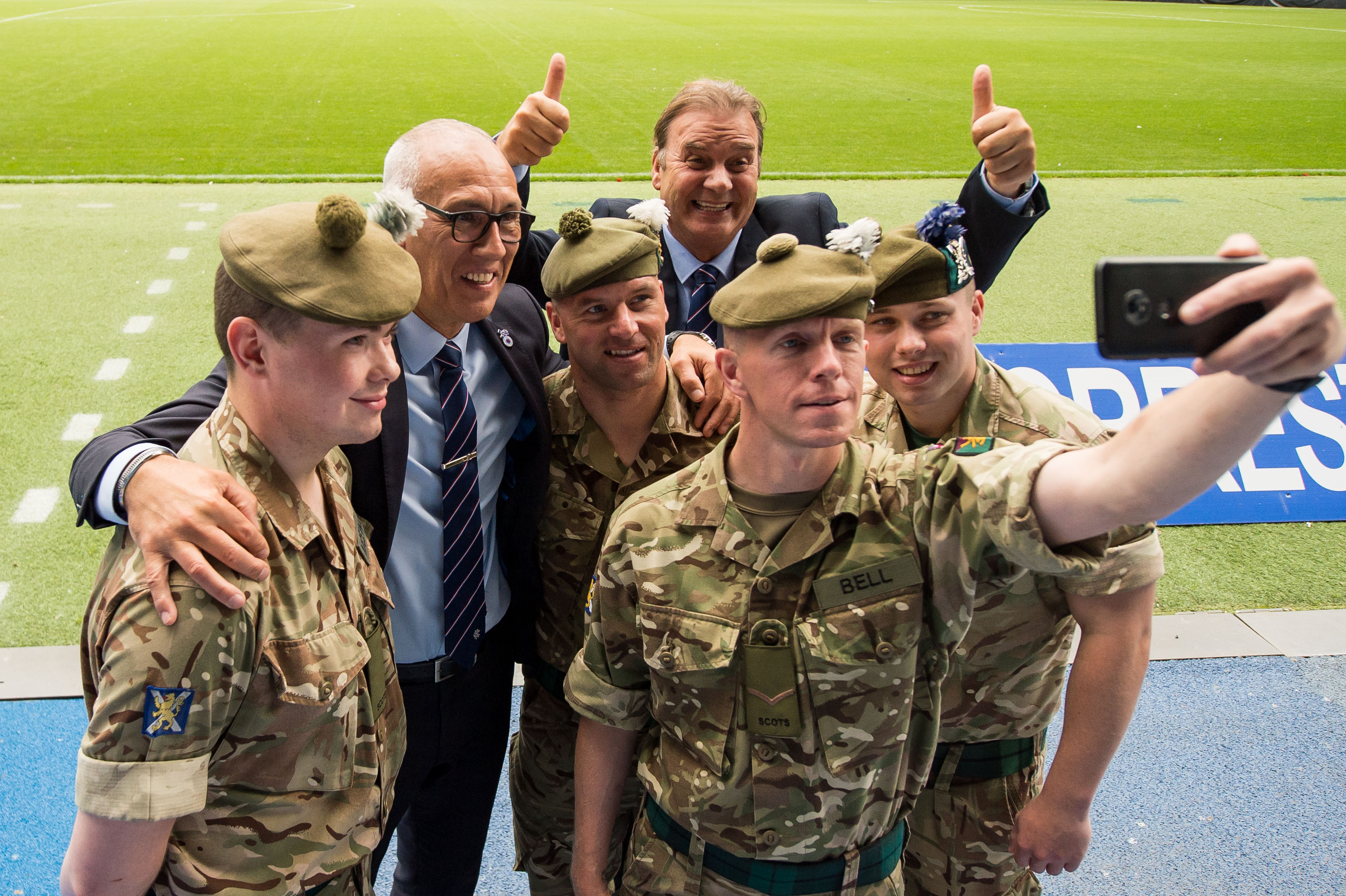